A few months back, I was craving cinnamon rolls, something mad. I had never made them before and so sought out the perfect recipe. I found this one and hit the jackpot with it. I will never use another recipe for cinnamon rolls, this one is the best. I found it on Joshua Kennon’s blog. (Thanks very much, Josh.) They take about half the day to make, but are so good. These are what I made in the pic below. 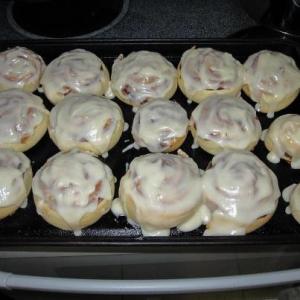 Joshua Kennon- Thoughts on Business, Politics and Life from a Private Investor http://www.joshuakennon.com/

You are here: Home / Gourmet Food / The Perfect Cinnabon Cinnamon Roll Recipe (10 Years in the Making)

The Perfect Cinnabon Cinnamon Roll Recipe (10 Years in the Making)

Most people don’t know the exact Cinnabon cinnamon roll recipe but for a decade, both Aaron and my mom have been intermittently attempting to crack the code, making various tweaks to their pastry-baking-marathons. They’ve been close but never hit upon a recipe that was indistinguishable, in our opinion, from the Cinnabon franchise version.

Until tonight. It finally happened. Jackpot. Victory achieved. By modifying and adjusting several different past Cinnabon cinnamon roll recipes from the Internet and – believe it or not, an unintentional mistake or two – the final product turned out far in excess of expectations. We will never look for another classic cinnamon roll recipe in our entire lives. The entire process was meticulously documented so that it could be reproduced. I’m sharing the bounty with you fellow foodies out there so you get to collect the dividend from their work. Go forth and enjoy.

After ten years of trying, Aaron and my mom finally managed to hit the perfect replica of the Cinnabon cinnamon roll recipe. It is flawless. They are absolutely worth the nutritional sacrifice – they have to be well over 500 to 750 calories each. I managed to take a quick snapshot as they were in the process of having the icing poured on the cinnamon rolls. I would have presented a beautifully staged photograph of a finished cinnamon roll but, alas, they were all eaten so quickly that there wasn’t time. Maybe the next go around …

Microwave the milk for 45 to 60 seconds. Then, dissolve yeast in warm milk in a large bowl. Add sugar, butter, salt, eggs, and flour. Mix well. Dust your hands lightly with flour and then hand knead the cinnamon roll dough into a large ball.

Put the ball of dough into a bowl that is sprayed with cooking spray. Cover the bowl tightly with plastic wrap and let rise in a warm place for roughly 1 hour or until dough has doubled in size. We turned the oven on and then put the cinnamon roll dough on top of the stove. The heat generated caused the dough to rise.

Once your dough has risen, it’s time to move on to the next step. In a new, small bowl, combine brown sugar, cinnamon, and butter. Mix them well. Spray a flat surface with cooking spray or sprinkled flour. Roll out your dough ball into a 16″ x 21″ rectangle roughly 1/4 inches thick then spread a 1/4 cup of softened butter on the dough. Next, sprinkle the rolled, buttered dough evenly with the sugar/cinnamon/butter mixture you prepared in your small bowl.

Preheat oven to 350 degree Fahrenheit. Once your cinnamon rolls have risen, bake them in the preheated oven until golden brown, approximately 18 to 20 minutes (we used a professional General Electric gas-range oven at 20 minutes exactly). The dough should still be soft, though fully cooked, especially toward the center of the rolls.

As your cinnamon rolls are baking, beat together cream cheese, butter, confectioners’ sugar, vanilla extract, and salt for the Cinnabon cinnamon roll icing. The icing should be spread on your cinnamon rolls when they are still warm, shortly after being taken out of the oven so that the frosting melts into the cinnamon rolls. This is reportedly part of the official Cinnabon process according to some of the employees.

When the cinnamon rolls are still warm, serve, and enjoy! 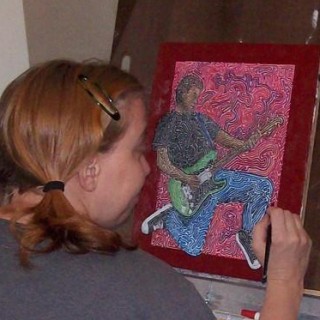 I was a visual artist in Arizona and am known for my Single Line style of paintings and murals. I am creative in many different areas and am always striving to learn, grow, live and love. http://xandrissart.com